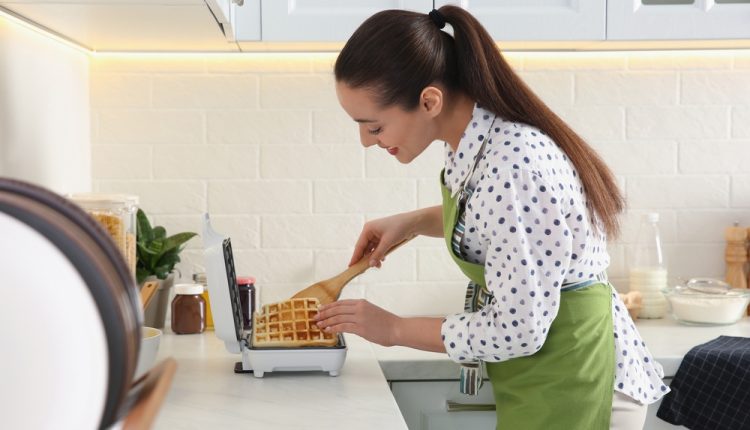 Who made the first waffle? The answer to this question is not absolute, but we can say that waffles are there in the world forever. If we talk about the first waffle instrument, it dates back to Ancient Greece. Since we are used to eating waffles in our childhood, it gives us a reminiscence of sweet past days when the only thing that made us happy could be a mere waffle. There are many types of waffles: Belgian Waffles, Waffles cones, and Bubble Waffles.

Belgium is the hub of various delicious cuisines, and waffles come on top of that list. These velvety, soft, and mouthwatering delights have been making our taste buds satisfied since the Middle Ages. It is almost impossible for their being to get out of trend, especially when they have already gained popularity throughout the world.

Americans are privileged because they have been enjoying these fluffy waffles since the early 1960s. The Belgian waffles appeared first at the Seattle World’s Fair. Everyone wants to have some sweet and crispy waffles treat at one time or the other. When waffles are combined with ice cream, the crispiness and smoothness breathe new life into the conventional Belgian waffles.

Sometimes you get a craving for Belgian waffles all of a sudden, but you can’t go out to buy waffles and want to satisfy your craving at home. In such a situation when one has recurring cravings and wants to make the waffles but can’t make the perfectly textured and fluffy waffles, a Belgian waffle maker serves the purpose. In no time, you can serve yourself tasty Belgian waffles.

A waffle maker is a gadget or machine used to make waffles conveniently at home. It provides you with super thick and fluffy Belgian waffles if you are following a recipe. It may need a bit of practice before you can make the perfect Belgian waffles. Generally, Belgian waffle makers come in various sizes, but the shape is round.

The machines may be a single unit or come in large sizes. Such machines have a special design and come with interchangeable plates. These plates can be rotated while you make waffles. It also has a temperature controlling knob allowing the user to adjust the temperature as per their requirement.

Belgium Waffle Maker: A Need of a Commercial Setup

Suppose you are opening a commercial café or kitchen, and your menu includes Belgian waffles. In that case, you just need a good quality Belgian waffle maker to serve the need for making a large number of waffles for customer orders. These commercial Belgian waffle makers are available in the market at reasonable prices. And even if they are a bit pricey, they will generate a reward that will compensate you for your investment.

You would never regret investing in a premium quality Belgian waffle maker.

Waffles make part of the menu in most brunch spots, hi teas, buffets, ice cream cafes, street food carts, and a place where breakfast is served. The Belgian waffle maker has become such a resource too in terms of its versatility as the users have introduced new ways to employ the machine. An example of such a way is giving crispy touch to mac n cheese, making it tastier by using a Belgian waffle maker. This machine provides you with an opportunity to make a tasty and typical crunchy mac n cheese in a matter of minutes.

Single Belgian Waffle Maker by Waring can provide your favorite and savory breakfast, brunch, lunch, or night meal. This famous product can produce 25 Belgian waffles in one hour. This Belgian Waffle maker can be very convenient to place anywhere in the home kitchen or any commercial setup. The single Belgian waffle maker has a new and exciting feature that provides you with the opportunity to replace a plate in case of scratching or damage.

As a precautionary measure to prevent the need to replace the dishes, one should prefer using heat-resistant plastic, silicon, or wooden spatulas and spoons to pour the waffle mixture and to pick the baked waffles. Most often, the scratches on the plates occur due to rough handling of the machine and using metal spatulas and spoons.

Another essential feature of this model of Waffle maker is the ease of making an authentic and classic waffle:

Setting number 4 is suitable for the new users. Still, the experienced user can improve their creativity and choose the other cooking time settings as per the requirement of the ingredients used or recipe to recipe variation.

This Waffle maker makes your fun double by reducing the space occupied on the kitchen shelf but with a double vertical feature to not compromise the capacity and even increasing doubling it then the Single Belgian waffle maker. It doubles the capacity while requiring no extra space on your kitchen shelf as the baking plates are stacked vertically.

This space-friendly waffle maker can cook 50 Belgian waffles in one hour. It is different from WW180X in the sense that it possesses fixed plates instead of removable. It has the added advantage of built-in heating elements. These heating elements are embedded in the waffle heated to assure uniform heat distribution to the waffle batter in the plates. Here each compartment has its green light as an indicator and distinct beeps for the time of completion of preheating and cooking. Consequently, one can alternate between waffle compartments for simultaneous baking

This waffle maker is just like the original WW180X model, but it quadruples this design. This quadrupled design Side by Side Belgian Waffle Maker, has a turnout of 120 waffles in one hour. Such productivity is a treat for those aiming to provide high-volume dining services, popular cafes, and busy commercial restaurants. Moreover, with this waffle maker, you can cook various dishes simultaneously. It has separate temperature adjustment knobs for each side. It also has uncommon beeps and light indicators to indicate the completion of preheating and cooking action.

Mini waffles are popular among both children and adults. The classic deep pocket and 1 inch thick waffles are easily made using Mini Belgian Waffle Maker. This waffle maker produces 100 of these beautiful, little delights in one hour. It also possesses removable plates that can be replaced when overly scratched or damaged beyond use. Mini waffles are an excellent option when required to be served as appetizers or desserts.

Q1: Which model of Belgian Waffle would be good if I use it for home baking?

Ans: The best option is Single Belgian Waffle Maker by Waring. It has a medium capacity, i.e., 25 Belgian waffles in one hour. With this capacity, it can help you throw a mini party at your home and serve them with this delight.

Q2: I am a clean freak. Which Belgian Waffle Maker can be cleaned easily after use without the fear of breakage?

Ans: You can go for any Waffle maker that has removable plates. It provides you with convenient cleaning.

Q3: I have a full-scale coffee café. I want to introduce waffles to my menu. Which waffle maker would be suitable?

Ans: In the case of a full-scale business café, you need to have a Side by Side Double Belgian Waffle Maker that has a capacity of 120 waffles per hour.

Q4: How can I prevent the damage and scratching of my electric waffle maker?

Ans: You should always use wooden or silicone spatulas or scrapers for picking up your cooked waffles. Most of the time, the cause of scratching is using metal utensils for the said purpose.

Q5: My Belgian Waffle Maker’s plates are scratched. Can I replace them?

Ans: Yes, you can surely replace the scratched plates with the new ones if your waffle maker consists of removable plates. If the waffle maker has fixed plates, you need to buy a new waffle maker.

Belgian Waffle Makers premium kitchen equipment makes authentic, good quality, crispy yet fluffy waffles. It comes in various sizes and capacities, allowing the user to choose the waffle maker that is best suited to them. If you want to scale up your home bakery, you can try different high-capacity Belgian Waffle Makers to increase the production of Belgian waffles.

Fixing the Issue of Blank Pages Print Out When Printing With Canon Printer: USB Cable For Printer Canon Error

Before You Rent an Apartment, Here Are 5 Things to Think About